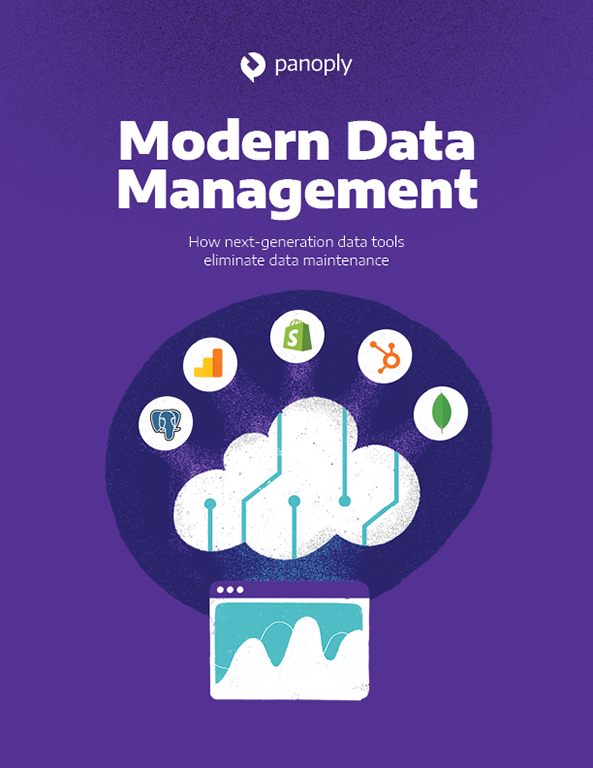 Amazon Redshift is one of the fastest growing and most popular cloud services from Amazon Web Services. Redshift is a fully-managed, analytical data warehouse that can handle Petabyte-scale data, and enable analysts to query it in seconds.

The main advantage of Redshift over traditional data warehouses is that it has no upfront costs, does not require setup and maintenance, and is infinitely scalable using Amazon’s cloud infrastructure. You can scale Redshift on demand, by adding more nodes to a Redshift cluster, or by creating more Redshift clusters, to support more data or faster queries.

For more details, see our page about data warehouse architecture in this guide.

Want to quickly understand how Redshift works and what it can do for you?

In this article we’ll cover: 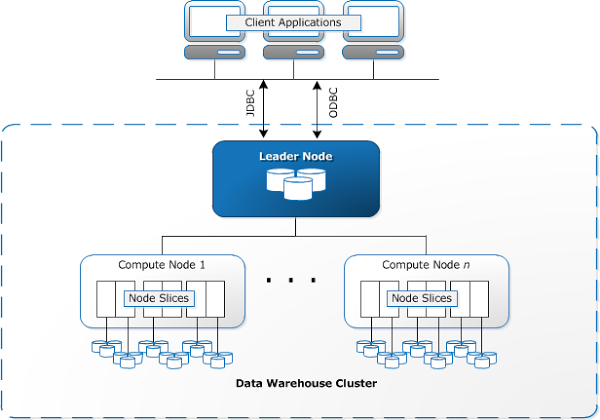 Redshift integrates with a large number of applications, including BI and analytics tools, which enable analysts to work with the data in Redshift. Redshift also works with Extract, Transform, and Load (ETL) tools that help load data into Redshift, prepare it, and transform it into the desired state.

Because Redshift is based on PostgreSQL, most SQL applications can work with Redshift. However, there are important differences between the regular PostgreSQL version and the version used within Redshift.

Since 2015, Amazon provides custom ODBC and JDBC drivers optimized for Redshift, which can provide a performance gain of up to 35% compared to the open-source drivers. Commercial vendors including Informatica, Microstrategy, Pentaho, Qlik, SAS and Tableau have already implemented these custom drivers in their solutions.

The Redshift Leader Node and Compute Nodes work as follows:

A few additional details about Leader and Compute nodes:

For more details, see our page about Redshift cluster architecture in this guide.

In Redshift, each Compute Node is partitioned into slices, and each slice receives part of the memory and disk space. The Leader Node distributes data to the slices, and allocates parts of a user query or other database operation to the slices. Slices work in parallel to perform the operations.

Within the node, Redshift can decide automatically how to distribute data between the slices, or you can specify one column as the distribution key. When you execute a query, the query optimizer on the Leader Node redistributes the data on the Compute Nodes as needed, in order to perform any joins and aggregations.

The goal of defining a table distribution key is to minimize the impact of the redistribution step, by locating the data where it needs to be before the query is executed.

Amazon Redshift is essentially an RDBMS system, and supports online transaction processing (OLTP) functions such as inserting and deleting data. However, unlike regular RDBMS databases, Redshift is optimized for high-performance analysis and reporting of very large datasets.

Redshift is based on PostgreSQL 8.0.2. Amazon Redshift and PostgreSQL have some important differences that should be taken into account.

The cost of storage and processing, and the speed at which you can execute large queries, are probably the most important criteria for selecting a data warehouse. The data below is based on Panoply’s in-depth Redshift vs. BigQuery paper, which you are invited to read in more detail.

Redshift’s pricing model is based on cluster nodes. You need to choose between Dense Compute and Dense Storage nodes. There are currently two options for each, ranging from 0.16-16 GB of storage, 2-36 virtual CPUs, and 15-244 GB of RAM.

Prices vary slightly based on Amazon data center; as of 2017 they range from approx. $0.25 per hour for the smaller Dense Computer node, to approx. $6.8 per hour for the larger Dense Storage node (see Amazon’s pricing page for the latest pricing). If you order a Reserved Instance, there are discounts of up to 75% compared to the per-hour pricing.

A common rule of thumb for Amazon Redshift pricing is that the cost of a Redshift data warehouse is under $1000/TB/Year for Dense Storage nodes, which scale to over a petabyte of compressed data. Dense Compute nodes scale up to hundreds of compressed terabytes for $5,500/TB/Year (3 Year Partial Upfront Reserved Instance pricing).

* This information is based on the Amazon Redshift Pricing Page.

Below we briefly describe the following key Redshift features:

Analytical queries are typically run on multiple rows of data within the same column, as opposed to OLTP queries, which tend to process data row-by-row. In a traditional database, to sum up invoice amounts across a billion database rows, you need to scan the entire data set. Because Redshift uses a columnar structure, it can directly read the column representing the invoice amounts, and sum them up very quickly. Columnar storage not only improves query speed, but save on I/O operations, and can reduce storage size required for the same data sets.

As described in the architecture section above, Redshift employs a Massively Parallel Processing (MPP) architecture that distributes SQL operations across data slices within multiple cluster nodes, resulting in very high query performance. Redshift is also able to reorganize the data on the nodes before running a query, which dramatically boosts performance.

For more details, see our page on Redshift Columnar Storage in this guide.

Redshift automatically compresses all data you load into it, and decompresses it during query execution. Compression conserves storage space and reduces the size of data that is read from storage, which reduces the amount of disk I/O, and therefore improves query performance.

In Redshift, Compression is a column-level operation. There are several options for compressing data based on the columnar structure of the data.

Redshift is a managed service from Amazon, meaning that most of the ongoing tasks and concerns in a traditional data warehouse are taken care of:

Amazon does advertise Redshift as a fully-featured RDBMS, but because it is highly optimized for analytical queries, updates and upserts are not trivial operations.

Redshift supports UPDATE and DELETE SQL commands internally, but does not provide a single merge or upsert command to update a table from a single data source. You can perform a merge operation by loading the updated data to a staging table, and then update the target table from the staging table. For more details, see the Redshift documentation page on updating and inserting.

Performing a large number of updates results in performance degradation over time, until a VACUUM operation is manually triggered. A VACUUM operation reclaims space and re-sorts rows in either a specified table or all tables in the current database. Running a VACUUM command without the necessary table privileges (table owner or superuser) has no effect.

Amazon Redshift is a powerful service that has taken data warehouse technology to the next level. However, users still experience complexity when setting up Redshift:

Panoply is a cloud data platform that makes it easy to sync and store your data. With code-free ETL and a data warehouse built in, you can go from raw data to analysis-ready tables in a flash…and without the costly overhead that comes with traditional data infrastructure projects.

Getting started is easy! Get all your data in one place in minutes.
Try Panoply Free